I was forewarned that Cougar Mountain was very tough 50k. That didn't stop me from going in overly optimistic about my capabilities there. The first 9.6 miles were great. The trail was rolling with lots of little climbs and fun descents and the autumn leaves were gorgeous in the fog and sunlight rising behind the trees. This first section reminded me of Galbraith Mountain in Bellingham, just like a helpful staffer had noted at Fairhaven Runners when I stopped in to stock up on Honey Stinger gels en route to Issaquah for the race. 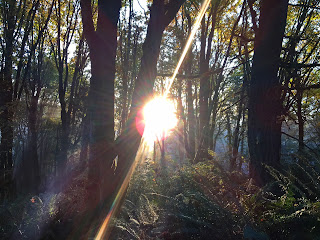 A few minutes before the scheduled 8 am start the race director noted that the bathroom line was really long so he had all the 50k-ers move up in line and delayed the start of the 8 and 20 mile racers by five minutes. He then suggested that they all stand around and create a tunnel for us to run through when we took off. It was a fun start to the day. The majority of the 8 and 20 mile racers caught up to me between 3.5 and 5 miles out. Unfortunately, this section was technical single track that required a lot of hopping to the side rather than getting caught up in their more fervent pace. I found myself excitedly looking forward to splitting off from their courses at mile 9.6. This was the location of aid station 2 where we would cross the road to Squak Mountain.

I didn't realize that in the remaining 21.4 miles of the race I'd only pass by three other runners, none of them of them in the 11 miles spent on Squak. If I had to sum up Squak Mountain in a nutshell I'd say that someone took all the hardest parts of the Chuckanut Mountains and squished them into 11 miles of highly scenic hardness. It was mostly ascent. A lot of technical climbing through thick ferns that would flop across my legs as my only company in the heavily fogged forest where big yellow gold leaves would float down to see me, like ballerinas of the forest.


There was one 2ish mile downhill to fly down that was a very close imitator to Cleator Road and thus pretty hard on the body. It ended at the third aid station where some friendly volunteers, including a woman dressed up as a shark, cheered me in. I grabbed some peanut butter and jelly sandwiches and requested a photo op with the shark. I didn't notice my wardrobe malfunction until after leaving. Lululemon used to make a sports bra titled "Stuff Your Bra." I have a few and wish they still made them. It features three pockets on the front of the bra and the intent is as it sounds - stuff everything you can in there. It's awesome when I run long with a handheld only and no pack. I can fit my iPhone, three gels, and a few other essentials. It just creates a boobs gone wrong look is the only drawback. In the shark picture my empty honey stinger wrappers had managed to start falling out and created a pretty great hot mess look, ha.

After leaving aid station 3 there were 13 more big hills to climb on Squak, ok I'm exaggerating, but aside from the final descent back to the road crossing there was what felt like nothing but climbing, climbing, and more climbing. I was pretty excited to get back to Cougar Mountain. I spent the last 5 miles on Squak fantasizing about it, really. I crossed the road to see more friendly aid station volunteers. Aid 4 was also aid 2 and the drop bag location. A man came over and insisted I not try to bend down anymore and he'd hold my drop bag. Clearly, he knows about mid race stiff legs and lower back from personal experience :) I pulled out the bag of herb marinated green olives Bethany gave me on my birthday and started just eating them straight out of the package. I'd been eating miniature Vlasic dill pickles that were traveling in a ziploc in my handheld's zipper compartment throughout the day, but only had one left and was craving salt. The volunteer pulled out my pecan pie Larabar to ask if I wanted to take that. I said yes, but then he pulled out my package of strawberry Pop Tarts, laughed and aid "no judgement I like them too." I decided to throw back my healthier Larabar and devour a fistful of strawberry Pop Tarts on the climb out of the aid station. They were delicious. Strawberry Pop Tarts and herb marinated green olives. Yeah, I like to think I'm getting some sort of honorable mention for weirdest self supplied fuel combo in the memories of those nice volunteers. 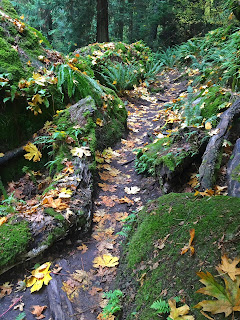 The last 10 miles on Cougar Mountain weren't a repeat of the first 9.6 which is great for variety, but I found myself wishing for a repeat of that easy flowing section. There was a lot of climbing, followed by runnable sections, followed by the kind of climbing that should have been runnable climbing except that I was fried. I encountered my first runner in ages, a fellow from Ohio who said he was feeling hellish and that the elevation change had gotten to him. I commiserated briefly and moved forward. Around mile 23 I managed to get a bloody nose. It's not anything to be concerned about as I've gotten them easily my whole life this time of year when the air is drier. However, I was mad because it happened on a runnable section slowing me down where I could have made up time. I quickly realized I had nothing on me that would pass for tissue so I just clamped it with my left hand and transferred my water bottle to the right while continuing forward. It's counterintuitive, but each time I've gotten one on trail I find they go away faster if I keep moving. I had plenty of water so I used a bit to wash the blood off my hand and that was the end of that.

Shortly before the last aid station, with 5 or so miles left it became firm that there was no way I'd meet my goal of a sub 7 hour 50k. I had 43 minutes left and the remaining terrain would not allow the required pace. I beat myself up some more about that and stayed faintly hopeful that I could at least beat my fastest 50k (Rattlesnake Ridge 50k 2015 7:26:48.) Up until this spring I have never used a coach. I just ran anytime someone else had my son and I wasn't at work. I ran often, but it wasn't organized with purpose or rounded out with speed, hill, and strength work. Now that I've been working with a coach since March and running again since May when I was allowed back post tibial stress fracture I have seen some really positive gains in my capabilities. So somehow I translated that into thinking I could get a great new 50k PR on a really tough course despite 7,200 feet of elevation gain. Maybe, on a flatter course. I passed one more runner just after the last aid station and a third quite shortly before the finish line, coming in at 7:36:49.


My sub 7 hours goal is arbitrary, I suppose. After I DNF-ed the Mountain Lakes 100 miler in 2015, 82 miles in, I told myself I was not qualified to try 100 miles again until I could crack a 7 hour 50k. The logic was faintly based on my splits from that course. It's also that I know so many super human ultra runners who run sub 6 hour 50ks or sub 10 hour 50 milers all the time like its nothing. These friends and acquaintances inspire me and I do often wish I could be like them. This strong base many of my friends have insulates them to run 100 milers without concern for the cutoffs. That freedom in running is a dream of mine. I am planning my second go at 100 miles late next September and I have a lot to achieve before then. For now, I'm looking forward to just running for fun and taking time off to focus on my busy season at work and do more with my son. I'll be antsy and ready to train hard by February and maybe, just maybe, 2018 will be the year I overcome my limits.