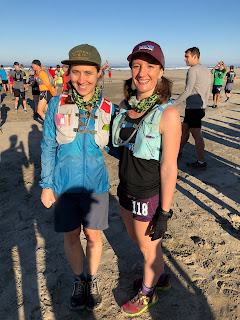 The Oregon Coast 50k/30k might be my favorite Rainshadow Running race. In spring of 2017 I was down with a stress fracture so I registered for the 30k hoping I could run again by October. It was beautiful, but I was jealous of the 50kers and their six mile beach run to start the race. In spring this year I excitedly registered for the 50k edition and talked Bethany into doing it too. The race weekend coincided with her "50k Birthday" making it a fun way to celebrate.

Between April registration and the October race quite a lot changed in both of our lives so while I love Yachats I fully expected to not go to the race for awhile. So much so that I last minute registered to go run a 50 miler in California by myself two weeks prior to Oregon Coast. My intent was in place of, not in addition to. As fate would have it I ended up on my way to Oregon to celebrate the birthday of someone I love very much after all. Running 50k just two weeks after 50 miles was not a wise recovery strategy, but I told myself it was my last race this year so downtime after was available if I hurt anything. 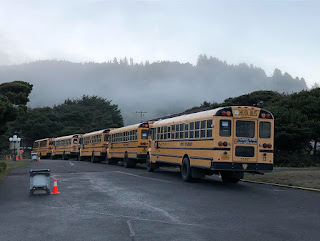 The morning of the race we had a quick foggy drive from Waldport to the Adobe Resort start in Yachats. The lawn of the Adobe is the start and finish of the 30k and the finish of the 50k. To start the race the 50k runners pile onto school buses and head six miles down Wakona Beach. The weather was gorgeous. Sunny and warm enough to make shorts and tank tops viable. James made sure to "apologize" to us for the weather. 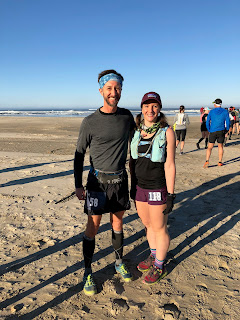 I got to see my friend Vern who I have not seen since I met him at my first White River 50 miler in 2015. He's run Oregon Coast every year since race inception. I understand why. It is my late season favorite as well. I took it easy for the first 6 flat miles of beach running, the 2 or so on the road, and settled in to my usual pace once on the trails. The 50k utilizes a different loop near Cape Perpetua than the 30k so at that point I experienced new to me trail. It was beautiful, but steep and one section had heavy sun exposure. I was grateful when at last the descent began. Earlier, on the Amanda Trail 11 or so miles into the race my right ankle had begun to bother me. I started to notice the pain with most steps, but made a decision to ride it out for the next 20 miles and finish. When I stopped at the last aid station, 6 miles from the finish, I asked them to tape my ankle for me. Less than a half mile later the stiffness of the tape was bothering me more so I stopped and took it off.

The rest of the race went smoothly. I was just ready to be done. Once I hit the road I knew I had less than 2.5 miles to the beer and pizza, err I mean the finish line, on the lawn of the Adobe Resort. I mostly use Spotify for music now and I decided to find something new to distract and motivate me through the last 20 minutes. I ended up with Chop Suey by System of a Down on repeat. I really have no explanation for that one other than it completely hit the spot. I knew Bethany was already done, right about an hour and a half faster than me as I'd predicted to her that morning. 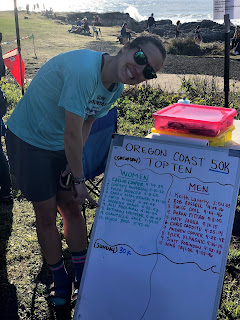 She'd surprised herself (not me though) and took 8th woman overall. This was her 3rd 50k and my 10th 50k. I finished in 7:03:12, my usual back of the mid-pack at 46th woman overall of 75 female finishers. If not for the ankle tape indecision I might have finally cracked 7 hours, but it wasn't a priority that day. 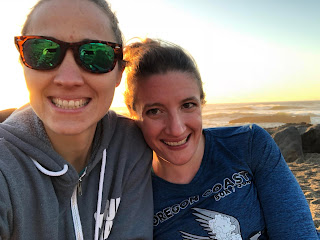 The finish line brought local beer, wood fired pizza, and chilling on a blanket with Bethany and Vern. Walking the beach and soaking our feet in the milky froth of the waves later was perfect. 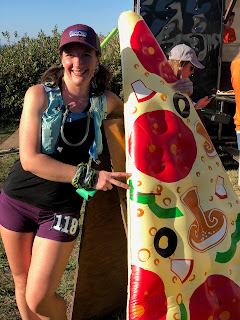 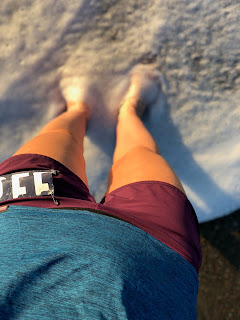 I'll just start assuming that whatever goes wrong or right each summer, both in life and races, that this beautiful fall race will wrap up my seasons. My birthday is almost as close to the race date as Bethany's is and a weekend away in peaceful Yachats has been a gift every time I've visited there. 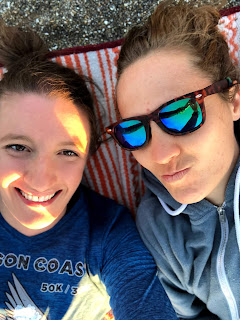 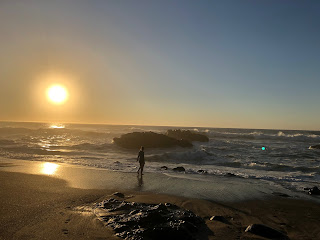