This race is a steep one. It was the third ultra I’d raced in a span of 28 days and it definitely felt like the hardest, despite not being the longest. A short description could be "uphill both ways." If it’s a steep trail in the Chuckanuts this race runs up it. It does eventually go downhill for the last 3-4 miles or so :)

To lull the runners into a false sense of ease the race begins with 1.7 flat miles on the interurban headed north from Lost Lake Parking to Cleator Road. After a brief climb on Cleator we climbed the switchbacks of Two Dollar to Fragrance Lake and then headed up Lost Lake Trail to the prehistoric beauty and extreme steepness of the Rock Trail.

Not feeling out of shape enough on a regular climb? Here try some wood stairs cut into the ground at a steep tilt. 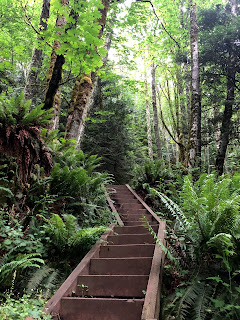 After reaching the top of the Rock Trail we headed over to the Ridge Trail and the first aid station at mile 7.5 or so. Local BTRC runners, Alicia, Sabrina, and Chris, were running the aid station and all volunteers were decked out in unicorn costumes. They also had donuts along with usual aid station fare like fruit, chips, pb&j, coke, ginger ale, and red licorice. I was glad I'd come back by later when it would become aid station 4 at mile 27 or so.


After leaving unicorn aid with half a pink sprinkled donut it was time to traverse the entire Chuckanut Ridge. A reprieve from steep ascent, but highly technical with some slick spots and intermittent short climbs this trail is never speedy. It is about 3.1 miles long and 2.3 miles in splits off with the lower ridge trail where the signage pointed half marathon runners down Dan's Traverse and 50k runners straight to finish the ridge. I've run the Fragrance Lake Half Marathon four times and I was jealous because I knew the sign meant they got to go downhill to the finish already.

The last 0.8 miles on the ridge went pretty quickly and led to a quick right turn onto Lost Lake before a left onto Raptor Ridge. After a bit more climbing it was time to descend, but the chosen trail was Salal which is quite technical and when my legs aren't rubber from a bunch of uphill and a 50 miler and 50k in the last few weeks can be quite the fun downhill. I felt sluggish and was annoyed that I was doing 12 minute miles downhill that should have been 9's. Then I rolled my ankle. The same one I had rolled in March and had to rehab while training for Sun Mountain. It was my signature outward roll and I felt a terse yank on my peroneal tendon. I kept moving and about a half mile later my ankle slipped off the side of the trail under a big bushy green leafy plant. I managed a dual slip off the trail and ankle roll all in one. This time I yelped out loud from a sharp shooting pain in the outer back soft tissue adjacent to my ankle bone. I was not happy because I was only 11 miles into the race, I have never DNFed the 50k distance, and I never plan to. This was my 12th 50k and one thing I can tell you about the distance is that for me personally it is too short to offer legitimate cause to DNF, other than not making a time cutoff. Thus I knew my plan was to run another 20 miles on a pissed off ankle, but that worried me because my purpose in running the race was BigFoot 200 training. I'm trying to push myself to a level of overcoming discomfort strong enough to train adequately for BigFoot, but not push so much as to get injured for BigFoot. Sometimes finding this fine line feels very clear and other times blurry.

I continued grumpily down Salal, eventually popping out on Lost Lake and descending the first non technical downhill to Hemlock and the second aid station at mile 12.5 or so on California Street. I grabbed some coke, water,and pb&j and continued down to the Chuckanut Falls Trail before, you guessed it, more climbing. This section was a climb up from the falls and then continued up Hemlock and Huckleberry till it intersected Raptor Ridge. Then I headed along a welcome flat bit of trail towards the most infamous of Chuckanut Mountain hills, Pine & Cedar. Some of the race leaders were heading towards me already on the out and back section, off to Lost Lake and eventual downhill. Descending Pine & Cedar was fun because other racers were ascending and it allowed me to see that I was not that far behind the bulk of the pack.

Once arrived at the bottom of Pine and Cedar I was quite happy to see the young family who was running the aid station. They had a warm welcoming vibe going and a nice assortments of snacks laid out. The woman was wearing a Cle Elum Ridge 50k shirt which led to talking and finding that it was both her and I's first 50k. Their daughter was stretched out over two chairs in a half nap pose. I complimented her on her set up and got a big 4-year-old grin in return. Another runner was sitting in the camping chair looking conflicted. I asked him if he was continuing on and he said that he wanted to so I smiled and waved saying, "come on then!" That's when he said he was experiencing disabling cramps in his legs. He had just taken a bunch of salt in hopes of feeling better so I wished him good luck and began the two mile 1,600 feet climb back up so fondly known as Pine & Cedar. I power hiked 70% of it and was briefly disappointed to attain flat ground again around the lake and with it the obligation to run. Eventually Raptor Ridge brought me back to Lost Lake.


This time we traveled in the opposite direction on the trail until arriving at the bottom of the final climb, chinscraper. This trail ascends around 700 feet in less than a mile and shares it's single track climb with the many downhill mountain bikers. A large group of mountain bikers was descending despite the race being well publicized. This created a few more breaks off the side of the trail than I would take purposefully. At the end of the climb I was once again back at the unicorn aid station. The donuts were long gone, but a rainbow of other snacks remained as did a ton of good cheer. I had some coke and watermelon and gratefully began the descent on Cleator Road before turning onto the Connector Trail to the Fragrance Switchbacks.

I was feeling the miles of the day in my legs but so grateful to be almost done and all done climbing. The switchbacks are technical, but I didn't catch my tired feet on any roots or rocks. A right turn onto the Interurban and a quick cross of Chuckanut Drive found me running down to the finish on Larabee Park's main lawn. I caught a woman I'd been leap frogging with a lot and opted to not pass, but ran in just adjacent and behind her. We were both really happy just to be done. This race is definitely type 2 fun :)